Notes On Fear And Fearlessness 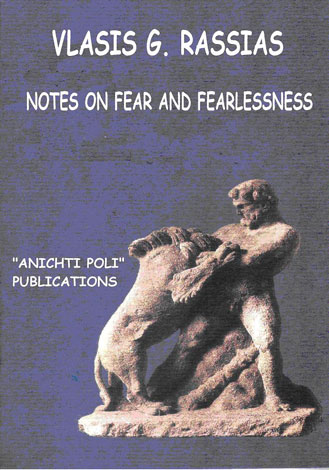 I
The human violence, hatred, anger aggressiveness, superstition are deeply rooted in fear and insecurity. The last two notions are the greatest obstacles for every man who seeks to pursue freedom, internal tranquility, autarky and bliss.

II
In turn, fear is rooted in the ignorance and the self-deceit of a non-existing, egotistical individualism (ie: atomistic soul) that deceives us by making us believe that we are separated from the universe, its processes and its Substance, separated and alienated from the notion of the Whole.

III
Fear is rooted into an arbitrary cluster of personality characteristics that the philosophy aversive (non philosophical) humans consider as their “ego.” A finite and shallow “ego” completely deprived of any kind of unifying relationship that comes to experience the natural World as something incomprehensible, alarming, impenetrable and threatening. The feelings of alienation and differentiation constitute the basic precondition of fear.

IV
Fear and insecurity are synonyms. Individuals (and systems) become phobic when they realize that they are unable to form a cohesive image of their real “selves” which shouldn’t be shrunk in a non-existing “ego.”

V
Whoever feels insecure, he backfolds himself towards his atomistic personality, frightfully takes cover behind the fortress of his “ego” and ends up becoming an egoist. A classical example of such a “fortress” that the insecure use, is Christianity that steers and directs the faithful individual towards exclusively saving only his very own soul.

VI
This not only applies to ordinary people but also to nations, religions and/or other forms of collective human actions. The notion of egoism in religions is expressed through “dogmatic malevolence”, in other words, the determining definition of the supposed orthodoxies and the persecution of the supposed unorthodoxies. Christianity, which is not only alienated from the natural world but also its declared enemy, officiates at this procedure as well.

VIIΙ
The heterophobic individual or collectivized group feels “threatened” by unknown situations or unknown people. Racial hatred, religious intolerance and all forms of unprovoked attacks are rooted in this threat illusion.

IX
The phobic is scared by the per excellence normal, that is the notion of the world as pure motion. He gets scared towards the idea of an eternal transformation of everything and refuses to accept it by denouncing everything that scares him as being or related to the “unknown”. The fear for this “unknown” includes the primary fear, the greatest fear of all, the ultimate fear of losing one’s “ego”, the fear of death.

X
Fear floods people with a double, contradictory emotion and pushes them towards a form of schizophrenia, where the full detachment from reasoning and reality correlates with an absorption in delirium and delusion. Fear abolishes reasoning and distorts perception. Thus, it can only be fought off through Knowledge and familiarization with the natural world or with Recta Ratio, in other words, with respect towards Nature or philosophical cogitation.

XI
Every egotistical individual and every egoistic collectivized group are destined to waste endless amounts of energy, thought, time and materials to secure a delusional sense of external insecurity.

XII
Every back-folding towards the atomistic personality is fatefully full of delusions. The fear of losing “ego” (which is one way or another, one more delusion) provokes an attraction to every form of further delusions.

XIII
Every denudation of people from their collective support of their identity, every detachment of theirs from the -deified and political in its dimension- organic collectivity that had been established by the pre-Christian world leads them to the deprivation of every substance as well as the deprivation of their very own existence’s background. The void is transformed into fear and then into hatred for the extraneous (these two last forms constitute what we previously called “heterophobia”). The phobic individuals (and the phobic collectivized groups) detest the truth, the objective reality, the direct contact with the internal and external nature and in general, they hate everything extraneous and different from their internal void that haunts them.

XIV
Whoever has fear, fatefully ends up exporting fear.

XV
The oppressors use Religions that propagandize fear as well as Mass Media dedicated to form consciences, aiming at increasing the distrust, the weakness feeling and the fear among the oppressed.

XVI
Fear is an inexhaustible source from where each system of oppression and exploitation of life draws energy. The most devious forms of fear are the ones who distribute fear equivalently, so as to be considered as a natural condition of humans.

XVII
The mediation of fear distribution mechanisms makes the phobic individuals to be classified according to their form of fear: the ones suffering from “self-generated” fear and the others who are “fear-programmed.”

XVIII
The flow of fear seems (without necessarily being) endless. At the same time, however, it is absolutely certain that it is fragile. Most of the “fear-programmed” phobic individuals fear the simple possibility of experiencing a Fear Void (lack of fear) and from the realization of the tragic fragility of what they have been programmed to consider their supposed “natural” condition.

XIX
The “fear programmed” phobic individuals are in a brace of shakes when facing either a mandatory self- responsibility or the possibility of having their languor terminated.

XX
In general, whoever fears ends up a fanatic.

XXI
A part of fanaticism results from the fear of the fanatic who is afraid of being wrong. The fanatic is destined to support in fits and starts an (usually non-existing) identity while he worships it almost fetishistically.

XXII
The fanatic attempts to reassure himself that what he believes is supposedly right by having the illusion that the more people believe the same things, the more correct and right these things are. The fanatic is haunted by a missionary spirit, a spirit of conversion.

XXIII
The phobic individual and the phobic collectivized groups almost never have the courage to try something completely new or completely unknown. On the contrary, they stubbornly remain attached to their familiar habits and ways. Their lives are deprived of the element of evolution, they are boring, cyclical, dormant, tasteless, and meaningless. For that purpose, the phobic turns to illusion and attempts to escape through daydreaming.

XXIV
This phobic attachment to only familiar matters shouldn’t be confused with the natural respect towards Tradition which is a system of values and consuetude that someone follows as an organic part of a living nation. Culturally, nations belong to Paganism, in other words to the part of human civilization that clings to an overall view of matters, as well as fearlessness, complaisance and openness.

XXV
The amplitude of nations, the Ethnosphere, incarnates polymorphism and Paganism blesses and secures it. Polymorphism is the sole element that serves communication and tolerance.

XXVII
Besides its pompous declarations, Christianity both as a collective system and as groups of separate and distinct individuals that comprise it, due to its phobic nature and insecurity, is completely incapable of tolerating others and contributing to the social well-being. On the contrary, it is always attempting to make copies of itself while it simultaneously makes grand efforts to grab material goods and human souls. Complaisance is a completely unknown notion to the phobic individual. The real complaisance is something incomprehensible to Christianity.

XXVIII
It is impossible for someone to be open or feel internal balance, amenity, tranquility and joy when he is afraid of every sort of threats from the world surrounding him, from different people, from people that belong to different religions or from a supposed… “Satan.”

XXIX
Tolerance requires good knowledge of the cosmic and human matters and trust towards BEING. Only the powerful exposure to the Very Being and the acceptance of the sanctity of nature (either through the Hellenic Philosophy and Humanism or through a healthy polytheistic religiosity) can strengthen the limits of tolerance of every man towards the others and towards life itself.