Beliefs and Practices of the Roma 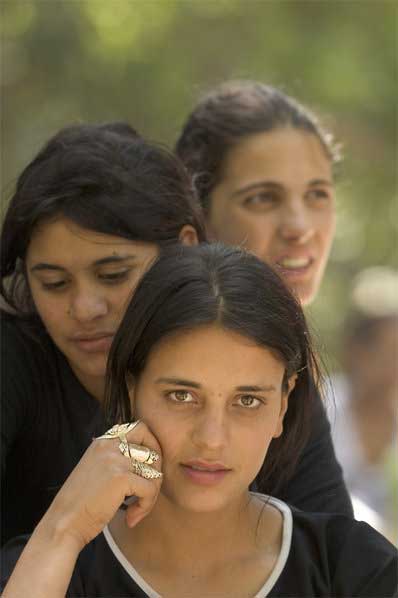 Many centuries in the past, the Roma were some of the last Goddess-worshipers in Europe. Their Goddess, Kali, was viewed as a trinity. Her symbol was a triangle. A male Horned God also played a prominent role. The similarities between ancient Roma belief and that of Wicca are obvious. These beliefs have long been abandoned.

There is today no single Roma culture. Nor is there general agreement on who should qualify to be called a Roma. Romani groups around the world hold different traditions, customs and beliefs. Groups that have settled in one location generally adsorb some of the gajikanι (non-Roma) local culture. Most Roma have converted the religions of their host countries, typically Christianity (Roman Catholicism, Eastern Orthodoxy, Protestantism), and Islam. Their formal religious affiliation is often supplemented by Roma traditional beliefs:

Marimι is a state of impurity brought on a person by the violation of a purity taboo. It also means a "sentence of expulsion imposed for violation of purity rules or any behavior disruptive to the Roma community." Some Roma consider the part of a woman's body below the waist to be dirty or polluted, because it is associated with menstruation. 8 In many tribes, women wear long skirts, the bottoms of which must not touch a man other than her husband.

A pregnant woman is considered unclean. She must not give birth in the family home because it would then become impure. Sometimes knots are ritually untied as the birth approaches. This is believed to assure that the umbilical cord will not be tangled. After birth, anything that the new mother touches is later destroyed. This quarantine continues at least until the baptism of the baby.

Newborns are baptized, usually in running water, when they are a few weeks old. Often, the infant is massaged with oil; this is believed to make it strong.

A Roma typically has three names. The first is known only by the mother; it is given at the time of birth. Its purpose is to confuse evil spirits by keeping the real name of the child from them. The second name is conferred at the time of baptism, and is the commonly used name within the tribe. A third, different name may be given when the child is re-baptized in a Christian church. It has little importance, except when dealing with non-Roma.

In the past, people were typically married between the ages of 9 to 14. This tradition has changed in many tribes due to the influence of the surrounding culture. Pre-marital sex is strongly forbidden. Marriages to outsiders are heavily discouraged. The wedding ceremony is usually simple. In some tribes, the bride and groom join hands in front of the chief or an elder and promise to be true to each other. In ancient times, they used be married by jumping over a broomstick in the presence of their families.

When a person dies, relatives and friends gather around and ask for forgiveness for any bad deeds that they have done to that person. They are concerned that if such grievances are not settled, then the dead person might come back as an evil spirit and cause trouble. In the past, the widow might commit suicide when her husband died so that she could accompany him during the afterlife. Sometimes, the deceased's nostrils are plugged with wax so that evil spirits cannot enter and occupy the body. Clothing, tools, eating utensils, jewelry, and money may be placed in the coffin in order to help the deceased in the next world. The deceased's possessions are burned, broken or sold to non-Roma.

They believe that a person can be reincarnated as another human or animal. Alternatively, they might appear as a mulσ or "living dead", seeking revenge on anyone who harmed him during his life on earth.

Many Roma rules of behavior relate to the use of water. They normally wash in running water, as in a shower. Baths are not used. Women's and men's clothes are washed separately, because of the impurities of a woman's body. Clothes of a pregnant or menstruating woman are washed furthest downstream from the camp, to avoid contamination.

Women must not expose their legs. They wear long, multi-colored skirts.

Out of respect for the importance of the horse in assuring Roma mobility, the eating of horse meat is prohibited in some tribes.

Many Roma women, called drabardi practice fortune telling. But fortunes are only read for non-Romas.

Other women are drabarni or drabengi and practice natural healing techniques.