Where the Ancient Gods of China Are Remembered 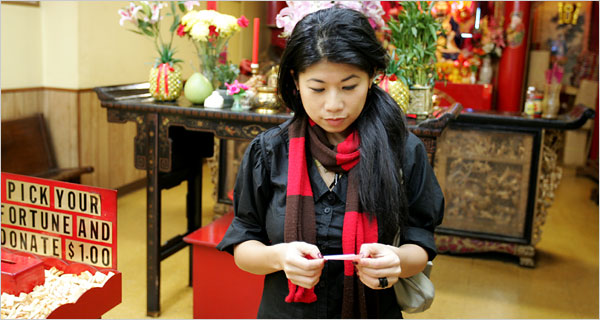 Tucked between a bodega and a fish market on Broome Street sits Fulai Temple, one of Chinatown’s many storefront temples displaying large golden buddhas shrouded in mysterious chants and clouds of incense. Unknown to most people are the dreams and desires in these buildings, along with the gold statues, golden paper and rainbow colors.

Looking for love, marriage, happiness? Fertility? Those precious things are promised in large red Chinese characters over traditional imperial yellow on plastic awnings, much like those over the front of a deli or a cellphone store. Open to the public, the temples provide a gateway to answers, but negotiating the terrain can be difficult.

That is why Isabel Chang, 31, a Web designer, decided to demystify the experience. Ms. Chang spent the last year studying these houses of worship, intent on showing how they place ancient Chinese beliefs in the contemporary landscape.

Her work has been turned into a public Web project that was opened yesterday on the Web (http: //gods.tenement.org/), sponsored by the Lower East Side Tenement Museum, where Ms. Chang is the digital artist in residence.

Her project, called Gods of Chinatown, consists of a map and visual tour of the temples. Ms. Chang, who lives in an apartment building on Essex Street with two storefront temples, sees them as “windows of insight into the hopes, dreams and longings of immigrant lives.”

They are often a first stop for Chinese immigrants seeking spiritual guidance and practical advice. Ms. Chang, who graduated from Cornell and holds a master’s degree in digital media from Columbia, was born in Taiwan, immigrated with her parents to Bolivia, then Florida, Texas and finally New York, where she has lived for a decade.

For her temple project, Ms. Chang’s own urban quest provided an added eccentric, romantic element. “At the time I was working at an ad agency and wanted to know if I should quit my job,” she said. “I was looking for a boyfriend with an XBox and a rice cooker.”

Ms. Chang is a petite woman with long black hair and a Brussels Griffon dog named Chewie. She took him with her when she interviewed, in Mandarin or Cantonese, the women in the temples who tell fortunes as they burn ceremonial money and cast the I Ching, the ancient Chinese book of divination.

Ms. Chang described 10 Taoist and Buddhist temples in her project and recently toured some of them. First stop, one of her favorites, the Temple of the Great Yellow Immortal, at the corner of Bowery and Pell Streets. She said that Chinese gods have their own personalities and that they were often people who had made significant contributions while alive and were deified after death. “He was a famous doctor 2,000 years ago,” she said of the deity honored by this temple. “He is known for being very accurate.”

Temples are both impersonal and communal. As Ms. Chang visited this one, a passing woman paused outside, put down her plastic grocery bags in the doorway, bowed several times with her hands in a prayer pose without entering, and then walked on.

Inside, beyond a large goldfish tank, two women were chatting. The one who worked there kept a watchful eye on the donation box. She politely declined to give her name or have her picture taken, and Ms. Chang said that was her experience with many temple workers and that some said they feared that Ms. Chang worked for the federal Immigration and Naturalization Service.

“They were surprised I was interested in this type of worship,” she said of the mostly older women who volunteer several hours of their day to watch over the temples, with the intense gaze of a Parisian concierge. “Young Chinese are not interested.”

Successful temples show their gratitude to patrons with red strips of paper that display the names of donors and the amount they give. For sale are plastic bottles of canola oil stacked in yellow pyramids.

The central focus of the room is the shrine. In the middle is the statue of the temple’s deity flanked by symbolic offerings of plentitude — stacked oranges, green curlicues of bamboo, fragrant lilies, fake shocking-pink petals, gold coins shaped into a pineapple and red-tasseled paintings of gods.

Protocol varies from temple to temple, but the basic practice involves putting several dollars in a donation box for a few sticks of incense. These are lighted before the deity from small candles floating in bowls of canola oil and then placed in an urn, like a miniature sandbox. “With your left hand!” Ms. Chang admonishes.

Then it is time to pick up the moonstones, two wooden croissant-shaped objects that are tossed like dice on the floor until the right combination appears, one facing up and one facing down. A fortune stick is selected from a canister followed by a visit to the woman of the temple, who provides a pink divination slip with writing that matches the writing on the stick. For a few extra dollars in the donation box, she may interpret the slip, which is in traditional poetry, and the fortune can be, Ms. Chang explained, “good, bad, really good or medium.”

Some temples are oriented exclusively toward women. The Temple of Zheng Fourteen Mother Saint at 100 Eldridge Street honors a famous folklore goddess. As Ms. Chang entered, she was sprayed with drops of water by a woman who said it was to make her fertile. The woman lived in back of the temple, her bed fitted into a closet-size space near a makeshift kitchen.

Unexpectedly, in the course of her temple hunting, many of Ms. Chang’s own soul-searching questions were answered. She quit that earlier job, postponing her freelance work in order to pursue her artistic projects. A photographer whom she found to take pictures for her Web map of Chinatown temples became her boyfriend (with an XBox and a rice cooker, too).

Above all, she began to better understand and appreciate her role in the neighborhood. The temple workers now ask her to translate their English mail.

eToro is the ultimate forex broker for rookie and advanced traders.